Ginger Root closed on March 7th, 2015 as both Gingers are pregnant!

They are still sewing in DC–read about their new ventures, and find out how to contact them here. 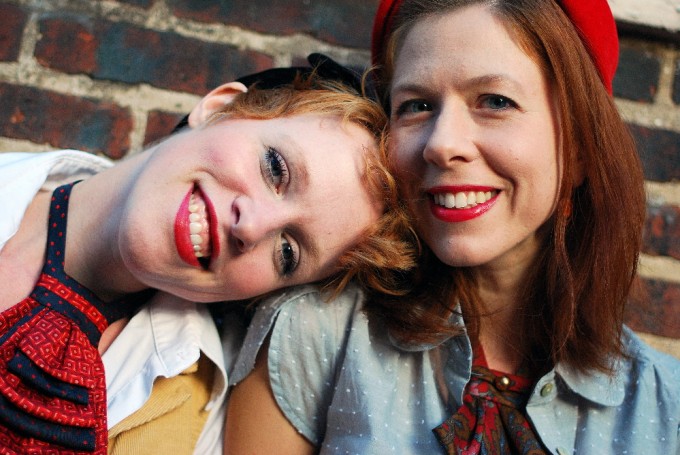 Ginger Root Design was born out of a combination of events, which we hope can only be encouraging to those who wish to follow their dreams. Kristen Swenson (now McCoy) moved to DC with a waitressing job in September of 2009, and by November she started her own tailoring business (by the name of ReVamp) out of her apartment in the Shaw neighborhood. Three months later, Swenson was in need of an additional tailor and called up her best friend in Minnesota, Erin Derge (now Orfanon). By the end of the conversation, Erin agreed to move out to DC within the month. The 2 friends quickly became busy with new customers and discovered their niche of repurposing old items from people’s closets that they weren’t wearing, but also couldn’t quite seem to let go of. The girls loved working with customers on how they could redesign and update the item into their new “favorite” item.

After 2 months, it became clear that the friends had already outgrown their apartment tailoring shop, and they began to look for studios. One very important day, Swenson and Derge sat out on the sidewalk enjoying the sun after a long day sewing, and they both admitted to their crazy dreams of each wanting to open their own shop. Both girls, trying not to give away their excitement said “That would be nice…” and realized without even saying it that they were going to make it happen. The girls found the perfect space and realized that there was the slightest possibility of having their own studio–they just had to transform the space in 6 weeks…while each tailoring 60 hours a week. So obviously they went for it.

ReVamp became Ginger Root Design–two redheads getting back to the roots of handmade. Ginger Root officially opened its doors in August of 2010. The clothing and neckwear in the shop is designed and sewn by the 2 owners, who love to repurpose and show people how eco-friendly can be classy.

And on the next chapter for these Gingers, both married ladies are due to expand their families this summer! On March 7th, 2015, Ginger Root Design closed its doors so McCoy and Orfanon and begin their own specialized home businesses.

Erin has launched Confetti Tailoring, a tailoring service for bridal, formal, and vintage. In addition to gown alterations, she’ll continue to work with brides and other ladies who want to re-imagine their mom’s wedding dresses, special occasion garments, or vintage pieces. Confetti will also be able to produce custom special occasion dresses for flower girls and attendants, as well as color-coordinated groomsmen/bridesmaid accessories.

Kristen is refocusing on her passion for recycling garments. She will be working under the name reTHINK Tailoring, collaborating with individuals who have old items in need of updating, recycling, and repairing. Kristen will also make time for design, especially her new project developing re-sizeable kids clothing.

Kristen and Erin would like to thank all of the amazing customers of Ginger Root over the past 5 years at Ginger Root!

Of course we will absolutely miss Ginger Root Design, but sometimes you have to end something amazing in order to create something even better. This is where we begin yet another very big chapter for the Gingers.